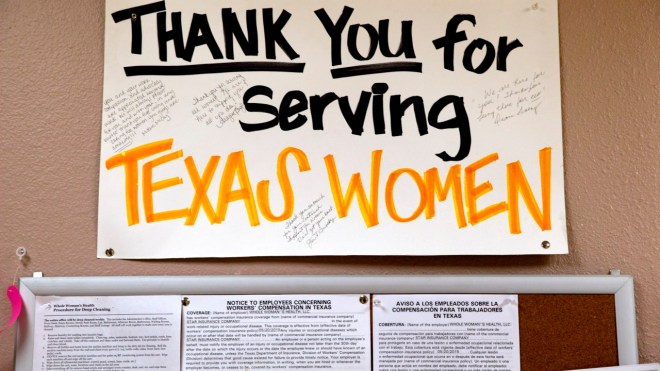 Amid the devastation of Hurricane Harvey, in a state already hit hard by anti-choice politics, one clinic is offering Texas-based hurricane victims free abortion care for the month of September.

In a Sept. 1 blog post, Whole Woman’s Health — which was the winning plaintiff in the Supreme Court case Whole Woman’s Health v. Hellerstedt, addressing the restrictive Texas abortion law HB2 — highlighted the hurricane’s impact on patients and vowed to assist those in need.

“During Hurricane Harvey, many of the clinics in Houston had to close temporarily, leaving women with very few options … We can only imagine what a stressful time this must be for those patients who had to miss their appointments or are waiting for the nearest clinic to open,” the post read. “To ensure our patients get the compassionate, quality abortion care they deserve, we’re providing no-cost abortions for those affected by Hurricane Harvey.”

Whole Woman’s Health is perhaps best known for its role in fighting Texas’ draconian anti-abortion law, HB2, which was responsible for reducing women’s access to medication to induce abortion by 70 percent and closed more than half of the state’s clinics. In June 2016, the Supreme Court sided with Whole Woman’s Health and struck down the restrictive law, ruling that it placed an undue burden on women seeking abortion care.

The organization, which operates seven clinics in four states, will collaborate with Lilith Fund as well as its own Stigma Relief Fund to help finance the procedures at their Texas clinics (located in Austin, San Antonio, McAllen, or Fort Worth), plus any associated travel and lodging costs.

“In 2016, 44 percent of our clients lived in the Houston metro area, the majority of whom were people of color. Like with any natural disaster, we know that low-income communities of color are hit the hardest due to lack of necessary resources,” Amanda Williams, the Executive Director of the Lilith Fund in Texas, told ThinkProgress. “These communities need our collective support.”

The organizations started an emergency fund for Harvey survivors who are seeking abortions, but cannot afford it. They raised more than $10,000 in a week.

One in three women in the United States will get an abortion in her lifetime, but more than 13 percent of women live in poverty (with women of color and those with disabilities experiencing higher rates of poverty). In other words, many grappling with an unwanted pregnancy don’t have the financial means to pay for an abortion under everyday circumstances, and especially during crises. Local funds may be their last hope.

Add a natural disaster to the mix and the situation becomes especially dire. In addition to the temporary closing of clinics, financial burdens in the wake of a crisis can make affording an abortion nearly impossible.

“During natural disasters, roads are closed, families have to evacuate and lose all their belongings, and it’s difficult to access healthcare. The need for abortion doesn’t go away, thus abortion funds are the bridge connecting folks to critical care especially with the clock ticking on gestational limits,” Stephanie Loraine, Board Vice President of the Central Florida Women’s Emergency Fund, told ThinkProgress.

“The burden of a natural disaster falls on poor people of color who are already disproportionately impacted by natural disasters due to redlining, environmental injustice, and climate change,” she added. “Abortion access is yet another issue impacted.”

Financial and logistical assistance for abortion is critical in Texas, even before severe damage from the hurricane. Pregnant women seeking abortions already face an uphill battle to access the care they need, thanks to anti-choice politics that reign supreme in the Lone Star state.

Clinics that were shuttered in the aftermath of H.B. 2 are struggling to reopen, leaving large swaths of the state without access to legal abortion care. According to the Guttmacher Institute, there are numerous policies in place designed to interfere with Texans’ right to abortion, including mandatory counseling and 24-hour waiting periods, forced ultrasounds, and restrictions on the use of public funding for abortion care. Minors face additional constraints, as they must also secure parental consent in order to obtain an abortion.

Because the Hyde Amendment prohibits the use of federal funds to pay for abortions, it is unlikely that politicians would prioritize abortion services at a time of crisis.

“It is important to note that reproductive health care is not a focus or priority when preparing for natural disasters, so the general public doesn’t think about how access is impeded during times like this,” Loraine said. “The lack of focus has a lot to do with the stigma around birth control, emergency contraceptives, and abortion.”

As Florida braces for Hurricane Irma’s impact, Loraine suggests that people in its path incorporate reproductive health care in their preparations.

“People will always need access to critical health care services such as abortion, no matter what Mother Nature does,” she said. “Folks should add condoms, emergency contraception, and birth control, if possible, to their disaster readiness lists.”