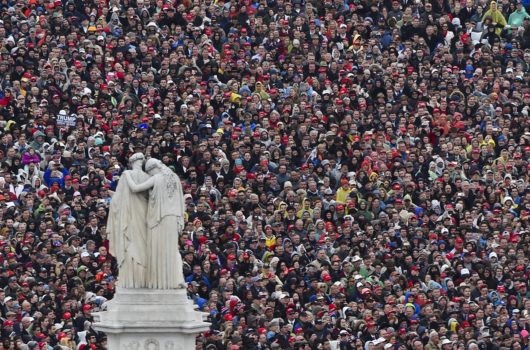 Note: This originally published on Rewire.

We aren’t a full month into 2017, and already this year is promising to be a nightmare for our right to bodily autonomy. And while it’s easy—and understandable—to feel overwhelmed in the face of this onslaught, we must not become paralyzed by anger, fear, or a sense of helplessness.

It’s time to organize and resist any and all attempts to erode access to reproductive health. We are facing large-scale attacks, but whatever your skill set or experience, there are several ways to get involved. I spoke with several activists from rights, health, and justice groups for their perspectives and advice. Take heart: All of us have something to offer in the way of activism.

Get and stay informed. First thing’s first: We need to understand what our lawmakers have up their sleeves. While there are national efforts underway to erode reproductive rights—including defunding Planned Parenthood, a proposed nationwide abortion ban, and President Donald Trump’s promise to nominate anti-choice U.S. Supreme Court justice nominees—state legislatures are also preparing to decimate abortion access on a local level in a variety of ways.

As Baden pointed out, many states have restrictions in place already, and some may try to make those restrictions even worse for those seeking care.

“States will also try to keep extending and expanding mandatory delay periods before women are able to get safe and legal abortion, as well as bans on insurance coverage of abortion, and various other restrictions that do nothing to improve women’s health,” Baden said.

Some states, including Idaho and Texas, are even trying to make abortion a criminal offense—but the national media often doesn’t report on this. It’s incumbent upon each of us to proactively seek out what is happening, not just at the federal level, but in our own backyards.

Be inclusive and intersectional. Recognize that although the fight to protect and promote reproductive rights is an uphill battle for all, efforts to dismantle autonomy represent steeper challenges to some groups of people—and commit to supporting those whose conflicts are more complex than yours.

Sung Yeon Choimorrow, interim executive director of the National Asian Pacific American Women’s Forum, echoed this: “More than half a million Asian American and Pacific Islander (AAPI) women live below the federal poverty line, and many others live on the edge of poverty, rendering such costs prohibitive. And AAPI women are disproportionately targeted by race- and sex-selective abortion bans. In fact, the only women in the United States to be prosecuted and imprisoned for ending their pregnancies were AAPI women.”

Black women are also disproportionately affected by efforts to restrict reproductive rights. “Laws that ban abortion coverage or push care out of reach fall hardest on low-income people and Black women. Evidence from Texas and across the South already shows us that when reproductive health care isn’t available, Black women suffer and die. What Trump doesn’t realize is that our movement to trust Black women and value Black lives is growing-and we refuse to let him take us backward,” Monica Simpson, executive director of SisterSong: Women of Color Reproductive Justice Collective, said in a recent statement.

Indeed, we don’t. And just as our identities (race, gender, sexuality, ability, and the like) can overlap, so do our struggles. “Many of our social justice struggles are based in the fight for control over our own lives and our own bodies. That seems to be a universal theme among activist efforts, whether it is the right to a safe, legal abortion or fighting for gender-affirming health care to be recognized,” said activist Tory Smith.

To Smith’s point, recognizing the commonalities between us is crucial; doing so will help activist efforts be more inclusive and help increase visibility of the most vulnerable populations seeking reproductive justice. As Smith said, “We need to make our efforts collective efforts, now more than ever.”

Ratchet up the pressure on legislators. We must apply direct pressure on our elected officials to stand up for reproductive rights and fight existing and pending restrictions on abortion.

“Your senators and representatives quite literally work for you, so it is up to us to let them know when we support or disagree with their actions,” said Morgan Hopkins, senior organizing and advocacy coordinator, All* Above All. “Want to be even bolder? Set up an in-district meeting with your elected official.”

You can easily identify your representatives and find their contact information online. Email them, fax them, and by all means, pick up the phone. “Keep your members of Congress on your speed dial,” said Baden.

Bottom line: be that squeaky wheel.

Shout your abortion story. The internet has become a breeding ground for abortion storytelling in an attempt to destigmatize abortion, from the Shout Your Abortion project to We Testify. But our stories don’t need to live online only. One way we can actively combat a hostile climate to abortion is simply talking about our own experiences-with friends, coworkers, and family (as appropriate).

Of course, disclosing such a personal experience is a big step. “If this is the first time you’ve spoken out, you can contact an organization that supports storytelling, like #ShoutYourAbortion, which can help you decide what format is most comfortable and give you the option of withholding identifying details if that’s important to you,” recommended Katie Klabusich, a writer, speaker, and founding board member of the Clinic Vest Project, which helps connects potential volunteers with local groups.

But whether it’s your first or hundredth time, self-care and understanding are priorities. “There’s no one—or two—right narrative,” said Klabusich. “Your story is yours; your experience and feelings … are valid. You deserve love and support, and not to be silenced if you want to speak out.”

Support your local clinic(s). Perhaps now more than ever, abortion clinics need your support. Consider donating your time and thanks; clinic staff, who regularly face harassment and even threats and acts of violence, would surely appreciate a thank-you card or other similar gestures. And there’s no need to wait for the National Day of Appreciation for Abortion Providers!

Another way to support your local clinic is through clinic escorting, or helping to guide patients and staff into and out of the building. This may sound simple, but it is undoubtedly a challenging—yet highly rewarding—way to show solidarity with abortion providers and patients.

“Escorts practice non-engagement. Not responding to the personal attacks hurled at you, patients, and their companions is the hardest thing for most new escorts to get used to,” explained Klabusich. “The most rewarding part is seeing the relief and gratitude in patients’ eyes …. I also love how much providers appreciate us! It makes me feel like part of something that has been going on for millennia: helping people control when and if they become parents by empowering them to access care.”

Luckily, there is the National Network of Abortion Funds, which helps patients overcome these barriers by working with clinics to help pay for abortion care or by offering support via transportation, child care, translation, doula services, and somewhere to stay if travel is required.

Consider donating to your local abortion fund; no amount is too small.

Stay positive! Yes, the outlook for reproductive rights is dire right now, but we must remain positive.

“The resilience of our community has been tested time and time again. The attacks on our freedoms and our human rights have become unfortunate norms, and still the resiliency and power of the people are palpable,” emphasized González-Rojas.

We also have legislators who are boldly championing reproductive rights with legislation like the EACH Woman Act and the Women’s Health Protection Act, which Hopkins described as offering “visions for the world we want to live in, where politicians don’t interfere with someone’s personal decision about if and when to parent.”

It’s imperative that we don’t spend all of our energy fighting the negative; promoting positivity, whether it’s acknowledging our staying power and previous victories or advocating for pro-justice legislation, isn’t just good for our souls, it’s an act of political warfare.